What is the PermGen?

The Permanent Generation (PermGen) Heap is a heap in the JVM dedicated to storing the JVM’s internal representation of Java Classes (and also interned String instances).

In the Oracle JVM, the heap is a fixed size, if an attempt is made to load more class instances than will fit in this area then a OutOfMemoryError is thrown, even when there is still plenty of space on the other heaps.

You can increase the PermGen heap size with the -XX:MaxPermSize flag, but typically increasing the heap size is just putting of the inevitable, instead of addressing the root cause.

A memory leak, in Java? Yup, it happens. When something holds onto a reference to an object instance, it cannot be garbage collected, eventually if enough errant references are held, or the graph of other references onwards from the errant reference is large, the GC cannot free enough memory and the heap is exhausted.

So you can see even one errant reference can cause a lot of memory wastage, particularly if the target of the reference happens to have been instantiated by a class loader that instantiated a lot of classes.

The Tomcat wiki enumerates just some of the ways this can happen, and this great presentation by Mark Thomas goes into more detail on this topic. In fact the problems are so prevalent that many application containers already include logic to try address these leaks themselves.

So you’ve got a PermGen error and you want to find the root cause, let’s work through a Tomcat specific example to get a flavour for how to go about tackling this kind of problem.

We need to hunt down these web application class loader instances, and figure out what is holding on to them.

This needle in a haystack hunt used to be quite painful, but since JDK6 (Update 7 or later) we have a great tool that ships with the JDK that makes things much easier: VisualVM.

VisualVM is a graphical tool that can connect to any JVM, allow you to take a dump of the JVM’s heap and then let you navigate that heap.

In Tomcat, the class loader for a web application is a class named:org.apache.catalina.loader.WebappClassLoader. If our Tomcat instance has only one web application deployed, then there should be only be one instance of this class in the heap. If there’s more than one, then we have a leak. Let’s use VisualVM to check this out:

You’ll a screen similar to the following:

You’ll now see something similar to the following:

Click the ‘OQL Console’ button. This displays a console that allows you to query the heap dump. We want to find all instances of : org.apache.catalina.loader.WebappClassLoader.
Enter the following in the Query Editor pane:

Press Execute and you will something similar to the following: 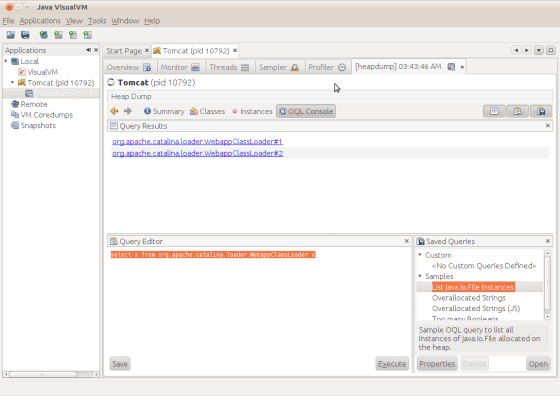 Use the Tomcat manager application to restart the web application (http://localhost:8080/manager/html), and take another heap dump of the Tomcat process.
Navigate back to the OQL Console and enter the same query again: 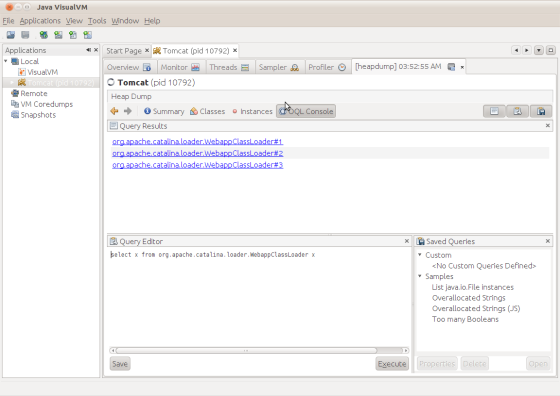 Notice how there are now 3 instances, we have a leak, one of these 3 instances should have been garbage collected but wasn’t, which one is it?

In Tomcat there is an easy way to tell, active class loaders have a field named: started which is set to true. Click through each class loader instance until you find the one whose started field is false.

So in the bottom pane, right click on the this reference and select ‘Show Nearest GC Root’. You’ll see something like the following:

Right click on the instance, and select ‘Show Instance’

sun.awt.AppContext type is not a class I’m familiar with myself, time to figure out who/what is instantiating it.

Restart your tomcat in debug mode, I use:

Now we need to remote debug the class loading sequence, I’m going to use Eclipse to do this. We need to set a class load breakpoint on sun.awt.AppContext:

Now we need to trigger the class loading sequence. Connect your debugger to the Tomcat instance, and the debugger should stop at the point where sun.awt.AppContext class is loaded:

Aha, it’s been instantiated by the JavaBeans framework, which in this instance is being used by the Oracle Universal Connection Pool (UCP). We can also notice that the contextClassLoader is a final field and it looks like AppContext is a singleton, so we can infer that this field is set once and once only during the instantiation of AppContext.

So we have established that it’s code within our application that is provoking the leak. Now we need to figure out a cure.

At application startup, we need to assure that when sun.awt.AppContext is initialized WebappClassLoader is not the current context class loader. Something like the following should work:

I added this code to my servlet context listener, causing it to execute during application start-up and it had the desired effect, curing this particular memory leak.

The process for finding the root cause of a leak is to use a heap analyzer like VisualVM to find the uncollected web application class loader instance, and then find the root GC object that is directly or indirectly holding onto the class loader. When you find this object, use your debugger to discover how this object is being instantiated and then devise a way to modify it’s behaviour so that it does not continue to hold on to the class loader reference forever.

Thanks for stopping by, I've moved to a self hosted blog, you can find me posting at https://blog.cdivilly.com from now on.